Each edition of ‘Try Now’ Tuesday highlights a new App Store Demo built for a top developer. In case you missed it, we officially rolled out App Store Demos on 8/30. Check out the full press release!

Earlier this year in May, Game Insight celebrated the first anniversary of the worldwide release of its hit action title, Guns of Boom. The game has boomed since its release (pun definitely intended), rising to over 50 million downloads worldwide! The game has developed a fervent audience, and Game Insight has helped foster the phenomenon further by creating custom, engaging content for its users. The company recently announced Guns of Boom eSports tournaments with $200,000 in prizes and partnered with influencers and celebrities, such as Danny Trejo. Another iteration of the “Trejo Tournament,” a three-way tournament with special maps, new guns, and valued prizes, started on October 4th.

When the Game Insight team heard about Google Play Instant, they were eager to take advantage, allowing potential new users to try Guns of Boom instantly upon landing on the Google Play Store.

“When players get their hands on Guns of Boom, they can’t put it down,” said Anatoly Ropotov, CEO at Game Insight. “But getting new users to convert from curious to installed has always been the industry’s biggest challenge. By partnering with AppOnboard, we were able to give potential players a taste of what Guns of Boom has to offer through an instant demo that faithfully reflects the game.”

When creating this App Store Demo, AppOnboard’s creative team had two main goals: a) show-off the 3D, engaging graphics and b) highlight several of the custom skins and weapons in the game (which users can use to customize and improve their characters).

“We wanted to show the player the feel of the combat in game, while also showing off the custom skins and weapons used,” said Nicholas Kim, Creative Engineer at AppOnboard. “The art in Guns of Boom was a great starting point, and we were able to really showcase how unique a player could look in the game.”

Both AppOnboard and Game Insight believe that this first App Store Demo is a start to a fruitful partnership together.

“I am a huge fan of Guns of Boom and the Game Insight team in general,” said Luke Auger, Senior Director of Business Development at AppOnboard. “Their team was awesome to work with, and together, we were able to build a mini-version and demo of Guns of Boom in a matter of a couple weeks.”

Check out the final App Store Demo below:

What We Love About the Unit:

The Guns of Boom App Store Demo has been one of the highest performing App Store Demos to-date, driving a 30% higher completion rate and 25% higher call-to-cation engagement rate when compared to AppOnboard’s benchmarks for App Store Demos.

Users are definitely highly engaged with the unit and are spending 37 seconds in the demo on average, which is not surprising given the unique 3D graphics and addicting gameplay that has already captivated millions of users to-date!

To learn more on how to get started with App Store Demos (we are currently offering a 30-day free trial), click here! 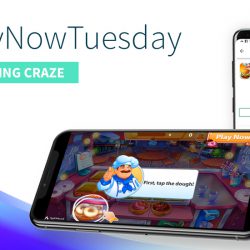